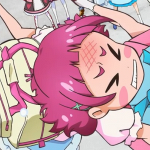 Hey everyone, this is FairySina's Userpage!

FairySina here! The creator of the probably known Pretty Cure Fan Series, Sky Pretty Cure! Since I always get new ideas and I just can't help then just write them down, I try to be active at this wiki, posting my less-major fanseries here. I'm also here because it gets pretty crowded at the first Pretty Cure fandom wiki ~ Let's be creative and get along well, alright? ʕ•ᴥ•ʔ

My Active Fan Series on This Wiki: 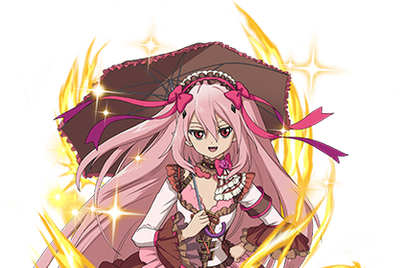 My Semi-Active Fan Series on This Wiki:

Udate January 2017: As Mahou Tsukai finally comes to an end, I finally get some time to update my Pretty Cure Ranking. This is especially neccessary as Mahou Tsukai turned out to be differend than I expected. Here comes my updated Pretty Cure ranking:

NOTE: This is my opinion, it can happen that you don't share it and see it completely different. Still. It is my opinion, there's no need to fight with me over it! 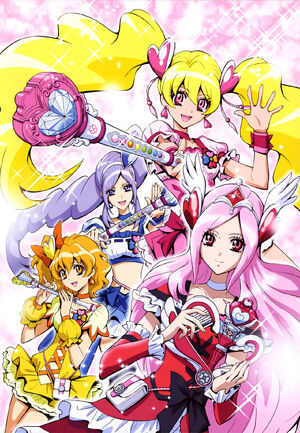 #1: My first favorite season is Fresh Pretty Cure!. Fresh Pretty Cure was the first Pretty Cure season I've ever watched and was the reason I got into Pretty Cure. I love everything about the season, the characters, the powers, the villains, the story, the comedy and the relationships. I even like how Toei didn't act like technology doesn't exist in this season. When was the last time the girls had cellphones? That's right. Fresh Pretty Cure! Also, Fresh is the one season, where the girls act like actual 14-year-olds. Yeah, 14-year-olds aren't just children and cute, they are teenagers who try to find their ways in life.

#2: Fresh is closely followed by Yes! Pretty Cure 5. Actually, the second season I watched completely, all episodes and the movie. Yes! Pretty Cure 5 displays a different generation of 14-year-olds and I think it's done very well. The characters are all lovable, even the villains. I have got nothing to say against Yes! 5. I even like their outfits. It's unique, I wish they stayed with this one instead of those of GoGo! 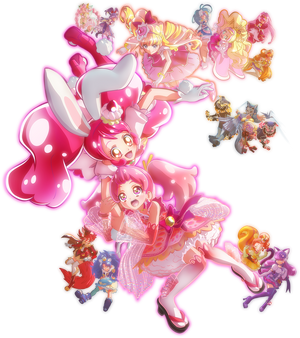 #03: Yes! Pretty Cure 5 GoGo!; I don't like this season as much as its prequel as I still don't get the stroy of the season. It's something with Flora and the Director of Eternal. And the fillers are a little too much and strange, like the christmas episode. But I still love the season for its interactions with characters. Bunbee was the golden gem of the villains and I'm glad that we got a second season for the 5 girls of Pretty Cure.

#04: Futari wa Pretty Cure, back to the beginnings. I love Futari wa, even though I always forget to finish the season. I love Honoka, Nagisa and their relationship (before you accuse anything; no I don't ship them). Even though Max Heart probably had better fights and the attacks were more badass, nothing will come against the fights of the first season. Especially as Kiriya and Honoka were cute together. 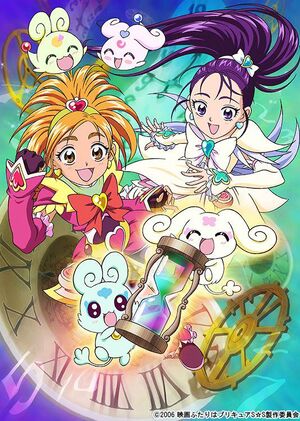 #05 Futari wa Pretty Cure Splash Star, Does anyone like the season? I don't feel like anyone does. Why's that? Splash Star is a good season with good concepts and amazing characters. Only because they are a little similar to Nagisa and Honoka... give Saki and Mai a chance, will 'ya? Though, I have to admit, I don't like their (Cure) designs that much. But I can live with them as their Cure concept; nature, is a beautiful concept.

#06 Futari wa Pretty Cure Max Heart, I love it, but get over with this quick: It would have been better if Hikari a) wasn't there like they put her in or b) was a stronger ally for Black and White. Negative things away, I really like the fights of Max Heart and the attacks are awesome as well ~

#07 Suite Pretty Cure♪, Suite Pretty Cure was - in my opinion - the last good season of Pretty Cure. Even though Suite was too childish for me already, they are not as bad as the following seasons. They got back to the concept of two girls holding hands in harmony. I really liked that. But.. I wished that they didn't display Hibiki and Kanade so addicted to each other and I also wished Toei hadn't let them look so weak towards Cure Muse. I mean seriously...
But heey, at least Ellen was a fun character. 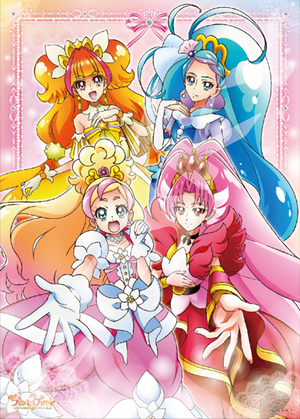 #08 Smile Pretty Cure!, it jumped up to #8? Yes, Smile Pretty Cure is my new #8. Ironically, following Suite, like in the canon season. I used to hate Smile for being a Yes! 5 copy. But today, I don't mind it anymore. The character designs are still strange (that hair) but after Glitter Force, I realized what good quality anime Smile Pretty Cure! is. I just wished they had less crying through out the season.

#09 Happiness Charge Pretty Cure, the season was so totally random, Arienai! But still, it was not bad. It had a kinda good story and let's be honest, Lovely's fight against Mirage was nice. Also, I loved the idea of international Pretty Cure, even if there were useless.

#10 Go! Princess Pretty Cure, the "best Pretty Cure Season" for the fandom of Pretty Cure. But since I stay away from the fandom (as most of them are agressive), I can proudly say, I don't think the same. I don't like the drawing style at all. THOSE LEGS, tha hell, they are long and thin, those shoulders, neeeh Toei, really! And then, I guess they love giving HaruHaru strange hands, huh? I mean in two attacks her hand is just like "WHAT AM I DOING". Also not a fan of form changes or the Princess theme. HaruHaru's strange hand collection:

Add a photo to this gallery 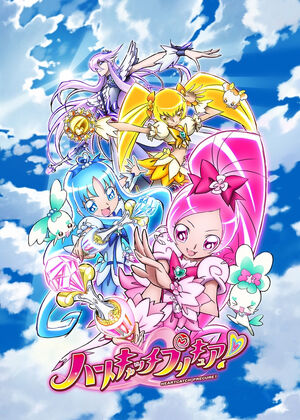 #11 Heartcatch Pretty Cure!, the over-hyped Pretty Cure itself... Heartcatch Pretty Cure!. The drawing style is terrible, worse then Go! Princess and I really don't like it... I like Moonlight as she is badass, but Heartcatch is boring, more boring than Suite and you can actually taste the re-used elements from Fresh! The main characters are... except for Moonlight... urgh... Erika is too flashy lazy, Itsuki is less a tomboy as she could be and Tsubomi... aaahh, I can't stand her. I love her seiyuu, but her voice annoys me! So high, not every girl has a high voice! Then she is always pessimistic, STAY POSTIVIE, why don't people get that negative thoughts just drag you down. And I don't like the whole "Pretty Cure Legacy" thing... A little bit too pushy if you ask me... Also, Moonlight should be the lead not Blossom.

#12 Mahou Tsukai Pretty Cure!, the witchy Cure gets the awards of the Lamest Pretty Cure season! I really expected a lot for Mahou Tsukai. It has such a good potential. I mean, really! The magic, Ha-chan, Mother RaPaPa, etc. And they threw that all away for tons of Merch and boring episodes. I'm searching something nice to say about Mahou Tsukai..
but I'm sorry, I can't find any. 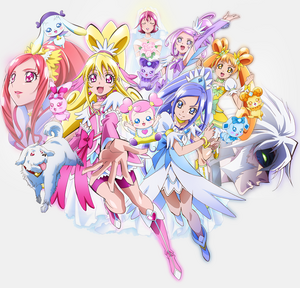 The Pretty Cure Ranking is hard, as I don't have opinions about most Pretty Cures. They just exist. Finished. But I can tell that I have three favorite Pretty Cures, here's the ranking: 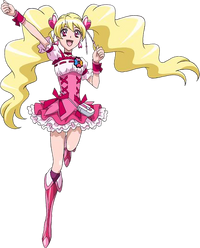 Love is basically the first Pretty Cure I've ever seen. You need to know that I started Pretty Cure in 2012 but wasn't interessted in it until I found Love and Fresh Pretty Cure!. Also, Love is funny and has a inspiring character. Her love for dancing and donuts might appear strange. But everyone of us has something they are obsessed with! And I like her even though she's a blonde pinky and shares the name with Princess Peach, whom I really don't like.

Nozomi is... she shares the first place in my Pretty Cure ranking with Love. She is just a lot like me. Though I'm nothing like Nozomi. Nozomi, like me, doesn't know what she is good at but never stops looking. Neither did I. To be honest, Nozomi even helped me to find something and it turned out that the both of us have a similar dream. I also think off becoming a teacher one day! Besides, Nozomi is strong but not in studies, I mean she has a strong character even though she is clumsy - that has nothing to do with her strength.

Ayumi! There are a lot of Echo haters out there, you know? I don't care. I can't tell why I like her but she's just great I guess! She's shy (like me) and has hard times to make friends (like me), yet she has the power to transform into Pretty Cure to save everyone! She is a true hero! Other Pretty Cures I like:

Misumi Nagisa/Cure Black and Yukishiro Honoka; holy, I really need to watch Futari wa Pretty Cure and Max Heart! I just love how strong they are! Their fights are the best in any All Stars Movie. Just to see them fight is worth watching the All Stars movie!

Hyuuga Saki/Cure Bloom/Cure Bright and Mishou Mai/Cure Egret/Cure Windy; would you guys stop calling them rip-offs? They are original characters with own powers, just were created by the same person who created Black and White. Yet, you don't need to like them, but I do. Black and White are Yin and Yang. Bloom/Bright and Egret/Windy are based on a Japanese idiom "flower, bird, wind, moon" (花鳥風月 kachōfūgetsu), the beauty of nature... I wish Toei would give us more Japanese themes *sighs*

Just btw, I don't want to list all of them, but I love ALL of the GoGo! and Fresh team~

I don't really care about Luminous. She just stands next to Black and White all the time and does nothing so... I can't tell if she's in the ranking or not... Milky Rose is, she totally is! I love how she shouts "Blizzard!" ahh >u< It's so beautiful agressive x3

I stated already that Moonlight is badass and that I can't stand Blossom. Um... I have no opinions about the Cures of Suite, though I love how Rhythm finished her attack xD She just walks away xD So awesome badass "I don't need to see this, I'm a good girl."

In Smile, I guess I like Beauty best and March, even though the hair is strange. I don't know about the rest though...

Doki Doki, no one. I like no one. I can't tell anything about them just that Ace is unneeded and Heart is OP. That's all I know

In HaCha, I love Alo~ha Pretty Cure~ everyone else is "i don't know", and can't tell if I like any of Go! Princess... sorry

But I like all Cures in Mahou Tsukai. Too many formchanges but nice~ Only Cure Magical's design... That hair... I'll never understand Japanese People...

So, I guess that was my Pretty Cure Ranking. Sorry if I wrote too much at some place, I just like to write a lot ~ 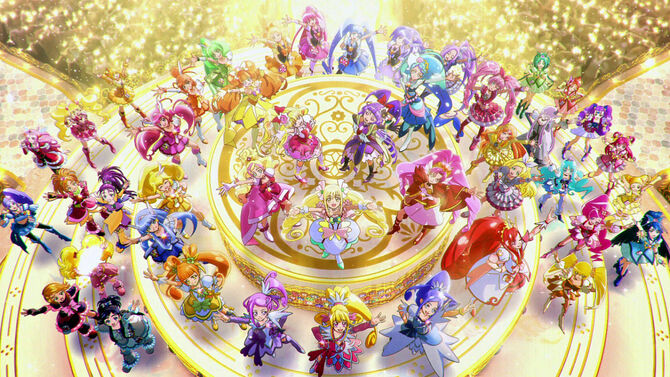 Retrieved from "https://fanmade-precure-series.fandom.com/wiki/User:FairySina?oldid=19521"
Community content is available under CC-BY-SA unless otherwise noted.